PLEASE NOTE: The information posted at this wiki about this or any quest are done so by players. They might or might not be 100% correct and should be looked upon as a guide, not an absolute.

The Unfolding Tale is a Quest in Villagers & Heroes.

I have met some interesting people in Gortrin Passage, and learned much of what transpired here in the past. Tiko lives, but is still trapped here in Gortrin. I wonder if this could have turned out better.

This is a unique optional quest that can grant large XP rewards. The quest is repeatable by resetting it with a Gortrin Hourglass, though you can only earn each of the eight different rewards once. It is a mystery you can slowly unravel, with a variety of outcomes depending on the choices you make, similar to the Choose Your Own Adventure books.

Warning: The Walkthrough section is a giant spoiler. Consider trying to solve the mystery and complete the quest on your own at least once before reading it! It will require much running around the zone to find clues from either items or the NPCs.

[Note: some of the rewards still need to be checked as there appear to be inconsistencies between the table of rewards and the detailed outcome list]

See "Walkthrough" section for details on how to start this quest.

This is a quest with different outcomes, ie is different on xp and other rewards. The description itself tells you if you have made the best choice or if you should've have done better.

There are 8 different possibilities, but be aware that all are NOT correct at this moment :

There are nine different outcomes depending the course of actions that you took. The goal is to have the best possible outcome for Tiko. You can reset the quest by using a Gortrin Hourglass, allowing you to do the quest again. You can do the quest as many times as you like, but you will only get the reward for each outcome once. (Most will do it a 2nd or 3rd time for either the 4M exp + socket or 8M exp.)

Eight paths will trigger the quest and give a reward, with one 'solution' not triggering the quest. The rewards get better the further in the story you get.

At every stage, pay attention to what you say to the NPCs! If you don't like the option given, choose to leave and return when you have more clues. (In general, it will be safe to tell one NPC about the existence of another, but for the better endings, do not tell them about where they are.)

To begin the quest you have to read The Handwritten Note at G4 first, which will trigger the beginning of the quest, then pick up the following items from killing zombies. This will allow you to pick up items from the lootable containers on the map that progress the story.

These items are not required:

The following items will appear after you've reached a certain point in the story. Each one will be interesting to at least one of the NPCs. When you talk to the NPCs, consider carefully what you will say as this will affect your reward. You may wish to walk away, and talk to the other NPCs for more information and then return. See the link at the bottom of this page for all the options.

After you've picked up one of each hammer, a series of pages from Tillothy's Journal can be found, one at a time in order, from lootable Handwritten Pages. You can gather all of them right away, or wait until the page is needed to progress the quest.

After talking to Raza, 2 more lootable objects appear. (Suspected bug here. Both these objects appear allowing you to talk to their respective NPCs. Do not talk to Tiko before talking to Gerard - it is suspected that this will glitch the quest and you will not be able to continue.) 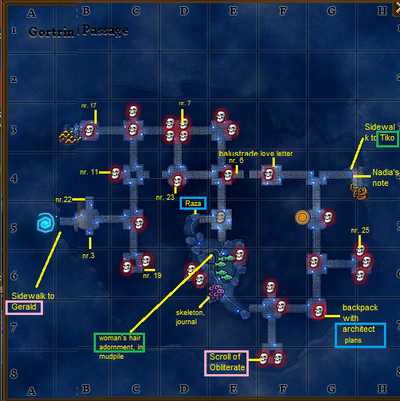