Edit
Article needs quality control.
This article may contain outdated information, have poor formatting and structure, or otherwise be in need of an overhaul. You can help out by editing it to correct any inaccuracies and improve the content. 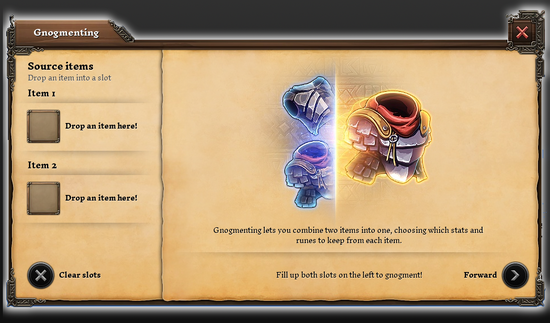 The process of combining two gears into one single gear with a fair amount of cost is called Gnogmenting. During the process, the player gets to choose which stats, feats, spells, and the gear's abilities.

To gnogment on PC, a player simply drags the preferred item into the cog icon in bottom-right corner of the Inventory Tab, or click 'Gnogment' Icon on the Menu Window. If on mobile, a player clicks the gear that wants to be gnogmented and an option to 'Gnogment' will pop up below the gear's description.

Gnogmenting does not require a specific skill line and can be done by anyone.

Gnogmenting is PERMANENT. If a feat, a spell, or an ability does not make it onto the finished piece; it will be lost forever. Be careful to check your item before completing the process!

The name of a finished gnogmented piece will inherit the base item's name; meaning that if you pick the stats from a “Short Sword” then the new name of the item will be “Short Sword.” The name can also be changed by the player with no extra gold fees.

Extra Sockets can be added to even further enhance a set of gear by allowing more feats, spells, and abilities on an item. To have an extra Socket, a player must have the required amount of Sockets in their inventory while performing gnogmentation.

Gnogmenting, or the combination of two items, is for the purpose of creating a single more powerful item, with the attributes of each. When placing two items in the gnogmenting window, their corresponding stats will appear on the screen. You will need to select one of the stats from the two gears that you like to create the base item. Next, the UI for selecting feats/spells/abilites will show up.

This is your chance to customize your gear however you want! Choose which abilities best suit your play-style, and click the feats/spells/abilities that you want to put in your final item. As long as there are no conflicting abilities, and you do not go over the allotted limit (unless you own sockets) then you will be able to create the final piece.

A combination of Elder, Crafted, and Dropped gear is a great strategy to create powerful gear!

When the two steps are done, the player will be able to rename the gear with the word limit of 62. And player get a preview of how much golds and sockets will be spent. If the player agrees to the cost, the Gnogmentation can be finished with both item creating one gnogmented gear.

After "A Tale of Earth and Sea" update, many changes were brought to Gnogmenting, this update includes :