Combat is perhaps the most complex and intricate mechanic in Villagers and Heroes. Yet, a basic understanding of combat is essential to enjoying all that the game has to offer. Your hero begins the journey of a lifetime with a basic weapon and only one ability and must progress through the game, acquiring better weapons, some gear, new abilities, and basic cooked items early. Then, you hero will learn about Gnogmentation, Elder Gear, powerful crafted gear, buffs, talents, ultimates, stats, guilds, the player-run economy, gathering, mounts, toys, a house and village, and so much more. All that you learn can be used to direct your fun in any direction you choose at any pace you choose.

Combat in the Tutorial Area[]

Let us return to the beginning: 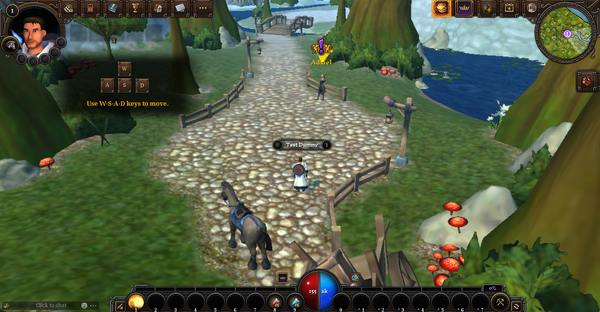 You have chosen your hero and are now in the tutorial zone. Before you take your first step there are a few things we need to understand:

Now we can proceed to our very first enemy: 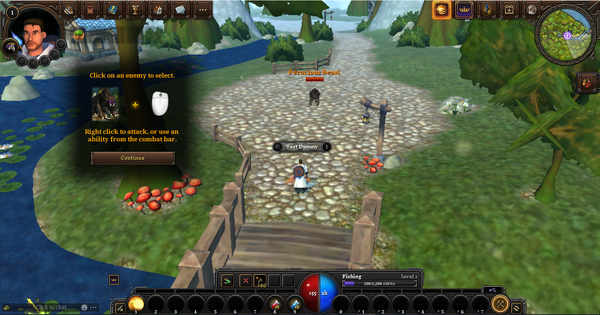 Did you see the popup? Get used to these in the early game. They are very informative for new players. In fact, this popup gives us the single more important information we can have: How to select things! There are various ways to select a target: left-click to select, right-click to act, and tab to cycle targets of the same type (ally or enemy) are the most basic ones that you should know. Also, before you attack this poor defenseless puppy, look at your hotbar to see if there is a certain key you need to press to use it. You can either use the hotkey or click/press to icon to use the ability. Find the best way to do this for you ... because you will be clicking/pressing/typing a lot in combat. For now attack and defeat this enemy and move on to the next part of the tutorial quest.

Adriel has just given you an item to equip. This item will be helpful for a several reasons. 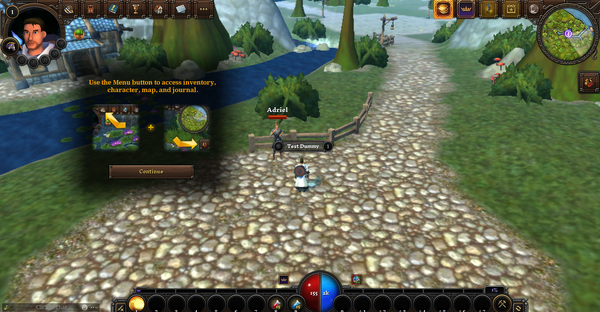 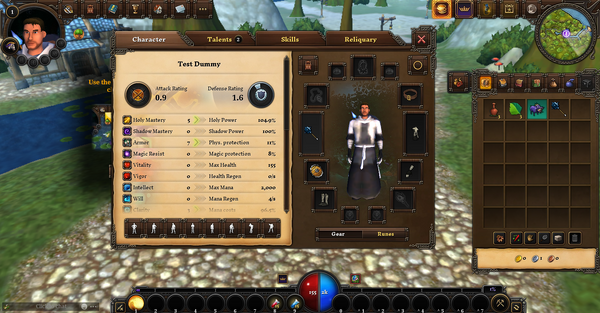 Once you select the two icons highlighted by the tutorial, you will be shown the character screen (via the menu icon) and the inventory screen (via the bag icon). You will become very familiar with these two screens as you progress through the game. For now feel free to hover over or long press anything that looks interesting ... just to see what it is. Don't forget to equip your new weapon by either moving it to your weapon slot or by double-clicking it in your inventory. 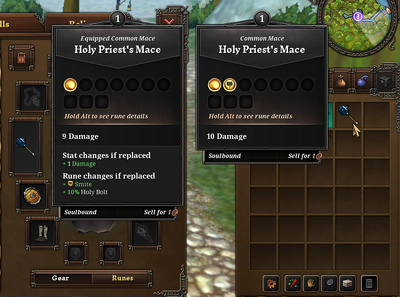 Notice that when you hover over a piece of gear in your inventory, one or two popups appear. One of the popups is your currently equipped item (if you have one) and the other is the item you are highlighting. You can tell which is which by looking at the very top of the boxes: The very first word you will see is "Equipped" on any equipped item. In the example, the equipped item is an "Equipped Common Mace". There is also some additional information we will get into later. For now, know that the weapon you were given is better and needs to be equipped NOW. Once you have equipped your weapon, talk with Adriel and continue your quest. Best of luck with the next encounter and ... this guy: 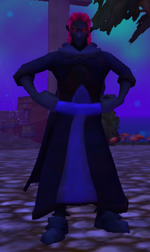 After defeating Mallok's Ghost, you will end up in the middle of the town of Summer's Hollow with little direction but a pretty blue quest marker. If you followed that quest marker for a bit, you would have been taken around town to various NPCs and eventually some flavorful Actors and Actresses. After a bit, you will start to accrue some items in your inventory. In the very early game you simply want to equip whatever looks good: more numbers; higher numbers; more abilities; a new gear piece. Soon you will want to start thinking about how the game works, what kind of villager or hero you want to be, and how to handle combat. We will start with a basic overview of stats and look at some of the early gear you will be gathering.

Every class has access to the same stats, which is a good thing because there are a lot of them and it will take some time for you to truly understand them. It will take some active studying to understand how stats work. In fact, there are many max-level players who have been playing for years that simply have no idea what stats do ... it is that complex. For now we will simply look at stats from far above. Open your Character screen again: 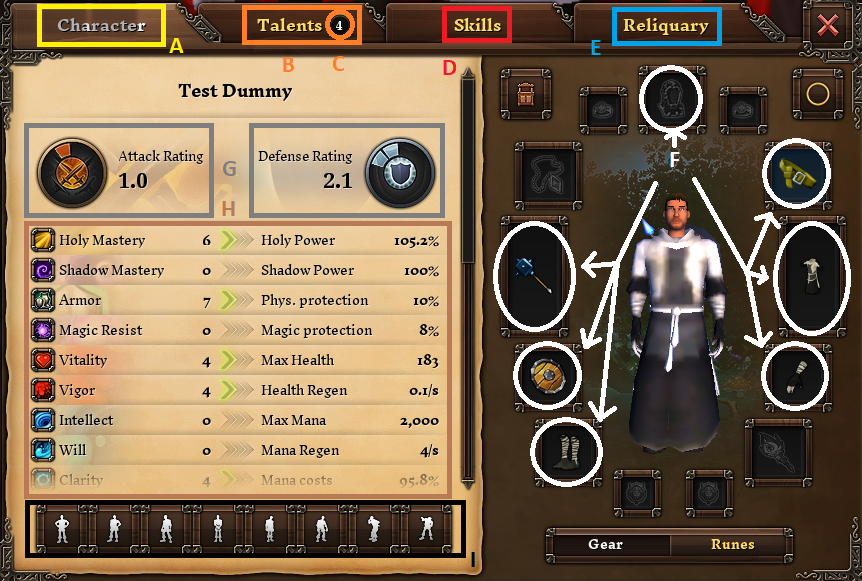 The sections highlighted by the colored rectangles are as follows:

Take the time now to look over everything. You will be seeing most, if not all, of this information many, many more times. When you are ready, let us take a look at your stats and what they do: 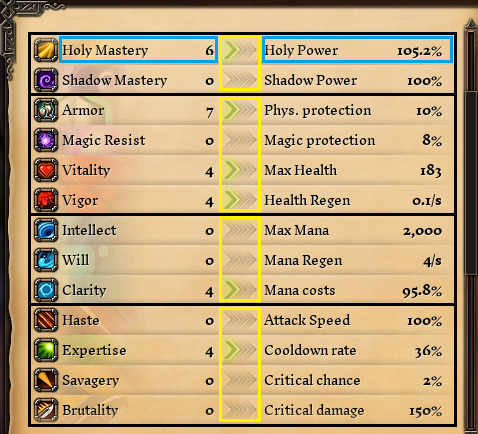 Notice how the stats have been grouped up. You need to be able to visualize this grouping when looking at your character as you level. The groupings represent four key dimensions:

To the left and right of the arrows you will see a bunch of words ... and they can be quite confusing. The most important thing to note immediately is the value added by the left column is only part of the value on the right. This means you may have a +20% bonus from the left side and a total (after adding everything else) +45%. Your stats are but one thing that contributes to your overall power. We will go through each stat and give a very basic explanation of what it does:

At this point you should have leveled up. The first time this happens, you will see a popup that looks like this: 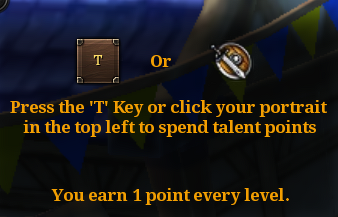 If you follow the prompt, you will see the following screen: 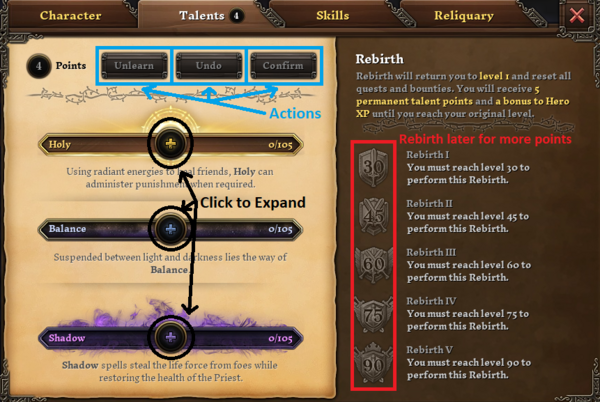 On the right side is a description of Rebirth. This is something you can do at levels 30, 45 60, 75, and 90 for more talent points later. On the left side you will notice 3 actions on the top:

The meat of this section is what lies below those actions: three bands with plus signs in the middle. Before doing anything you can see that these bands are labeled "Holy", "Balance", and "Shadow". Holy and Shadow are the two subclasses for this character: Holy Priest and Shadow Priest. There is even a pretty holy light and dark glow to accentuate them. So it would appear these are the places where out talents go for our subclasses. But what is the middle one: "Balance"? It is where all talents go that aren't directly related to your subclass. To open any of these bands, click on the plus sign in the middle of the band. Let us look at the talents for "Holy": 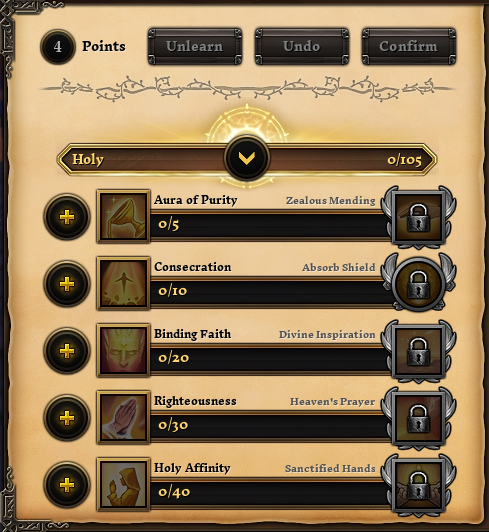 There are 5 types of talents in which you can invest your talent points. For this talent tree, they are:

Every subclass will have 5 talents. Each of these talents will cost the same for each class: 5, 10, 20, 30, 40. After investing all points possible into a talent, you will unlock the talent's ultimate. Over time talents between classes have become quite varied, but there are still some similarities:

Take some time to read over your talents to see what talents or ultimates you want to have. Perhaps you can even start to plan out how you want to use your points as you level. Before we get too carried away, though, let us look at that middle band: 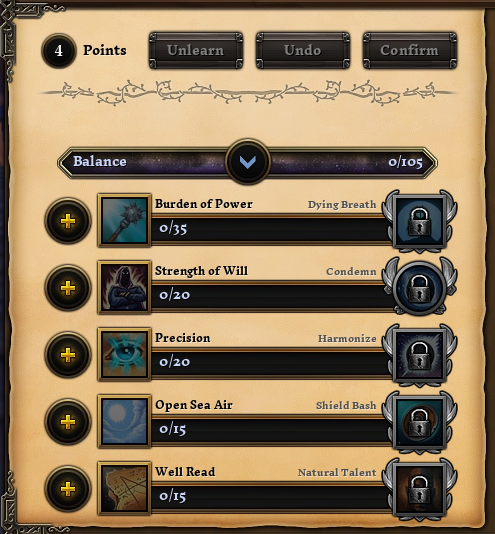 There are 5 types of talents in which you can invest your talent points here as well. For this talent tree, they are:

Over time, experimentation and curiosity (and maybe some tutelage) will help you understand talents and how they apply to your character. May you use them to the greatest enjoyment possible. If you wish to look into more class-specific builds either to get started or to plan your build for the long run, you can look at any of these resources, the official forums, or the Guides page.

What Do Abilities Do[]

Early on in the main quest you will need to speak to the Mayor of Summer's Hollow. She will want you to leave the town, but first, notice the other quest marker that popped up? 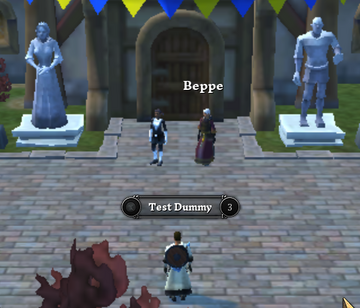 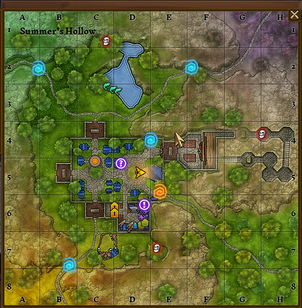 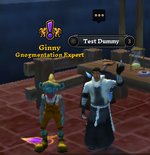 When you go to the quest marker on the map, you will notice a friendly-looking gnome named Ginny. This gnome will give you a quest that involves a very important concept in Villagers and Heroes: Gnogmentation! In short, gnogmentation is the process of combining two of the same type of item together to make something that has the characteristics of both. Proper use of gnogmentation is absolutely essential to acquire the best weapons and gear. So pay very close attention to Ginny and read the Gnogmenting Guide for further assistance. Ginny will give us a quest and a box to use for that quest. Opening that box will give you 6 weapons, which will contain 3 abilities for each of your subclasses. In the case of Test Dummy he got 3 Holy Priest abilities and 3 Shadow Priest abilities. 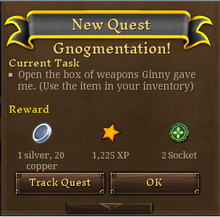 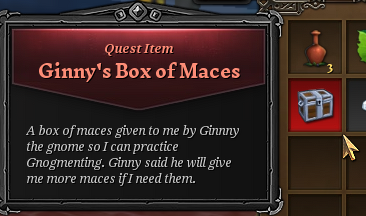 You can do any of the following and finish the quest (but it will not help you understand abilities):

Instead we want to look at one of the Priest's weapons to see what the ability rune on it is.

There are three different abilities on this screen:

Already there is quite a bit to look at and several questions we need to answer:

And all these questions were raised with just three abilities. As it turns out there are many different types of abilities in the game. We will be outlining all the different types and giving examples to illustrate what you can expect to see in game.

Single Target and Area of Effect

Many offensive abilities you encounter will be single target. That is, they will only affect one entity, be it an enemy, an ally, or even yourself. Many other abilities, however, are Area of Effect (AOE) abilities. That is, they will affect all possible targets in an area (always a circle). 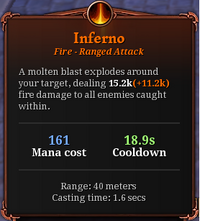 Notice that this ability, Inferno, is a ranged attack, but AOEs can also be melee attacks. Also, Inferno requires you to target an enemy, but AOEs can be centered ...

Most AOEs will affect a radius of 10m, but there others that have a radius of 3m, 5m, 15m, 20m and 40m, just to name a few. Remember, the radius of a circle starts at its center. So a nice way to remember how big the circle is ... is just to remember that it affects this target and everything within this many meters. There is also an in-game option that allows you to see the circle of influence by highlighting the spell in your hotbar (pc only? - needs confirmation).

Instant, Over Time, and Special Effects

Both damaging and healing abilities can deal their damage or healing instantly or over time. In addition, some abilities have a special effect that applies as well, usually to the target(s).

In the advanced combat guide (coming soontm) we will cover special abilities such as curses and threat generators.

This is the complete Combat Guide for the time being. I hope to flesh out the more complex parts of combat to make understanding them a bit less daunting. Here are some of my plans for the future:

I look forward to doing more with this. Until then, continue enjoying the game and thank the Otters.